The death of journalist Mohamed Aboelgheit, aged just 34, is a loss to journalism, not just in his homeland Egypt, but across the Arab world and beyond.

Mohamed, who passed away this week in London after a 17-month battle with an aggressive form of cancer, was a prolific and inspiring writer and a dogged investigative and award-winning reporter in the vanguard of a new generation of activists and dynamic journalists that emerged from the turmoil of the Arab Spring.

Over the past ten years his work has been recognised with numerous accolades including two prizes from the Fetisov Journalism Awards in 2019 and 2020.

In these stories, both winners for their Outstanding Contribution to Building Peace, he exposed international gun-running in the war in Yemen and, with Nick Donovan and Richard Kent, revealed the secret financing of the Rapid Support Forces in Sudan (previously the Janjaweed militia).

They are models of investigative reporting – fact-based, following the money, and challenging secrecy in the shadowy world of international finance and arms dealing. 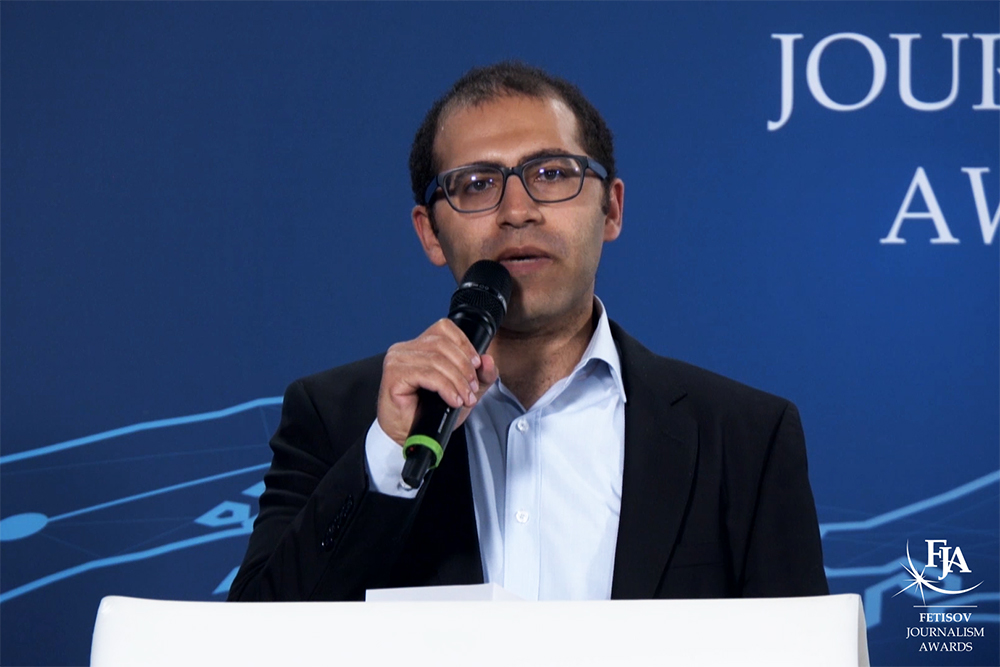 His other awards include:

Last month he was further recognised by the Egyptian Media Forum.

Mohamed began his working life as a doctor at the Imbaba General Hospital in Cairo following his graduation from the faculty of medicine, before turning to a career in journalism, first in Egypt where he worked with ON TV and Al-Shorouk newspaper. He was a leading member of ARIJ, the Arab Reporters for Investigative Journalism.

He moved to London with his wife Esraa Shehab, and their 8-year-old son, Yehia, where he took refuge from the hostile political climate in Cairo and was a staff member at Al Araby TV, working as a programme producer and he penned a weekly article for Al-Araby Al-Jadeed newspaper for several years.

In August 2021, he announced on Facebook that he had been diagnosed with stomach cancer, and that the tumour had already spread.

Typically, he decided to openly confront the disease and over the last period of his life he chronicled his battle with advanced cancer, drawing upon his own medical knowledge and building up an extraordinary audience of around 160,000 followers for his deeply personal insights and commentary on a painful journey.

This openness was confronting another taboo, because discussing health problems in public remains uncommon in many parts of the world and particularly the Middle East, especially by men, where it is thought by many to reveal vulnerability and weakness.

The journalist Dahlia Kholaif has written movingly about this impeccable flow of journalism and story-telling.

She writes: “Between detailing how he underwent two sessions of harsh treatment and chemotherapy, he described how the publication of a CNN investigative report he had contributed to, on Russia's exploitation of gold mines in Sudan to fund its war in Ukraine, has made him smile for the first time in days.”

Before his diagnosis, Mohamed signed up to a new project with the Organized Corruption and Crime Reporting Project, joining a group of 163 journalists in putting together Swiss Leaks, a comprehensive global expose of money-laundering and corruption.

Despite everything, he kept his sights on journalism that could make a difference to people’s lives. His focus on security, corruption and defence of human rights in the Middle East was a challenge in a region where hostility to dissident voices and ethical and independent journalism is embedded in the fabric of government and politics.

His work is unmatched in a region hostile to reporters, especially those probing sensitive issues of security, corruption, and human rights violations in countries ranging from Egypt, to Yemen, Palestine and Syria.

His commitment and passion for journalism has inspired thousands of young journalists and dozens of tributes have already been paid to him highlighting the honesty, truthfulness and abundance of professionalism in his journalism.

“Without realising it,” says Egyptian researcher and journalist Osama Diab, “Aboelgheit was able to create a new model of what it means to be an Arab journalist; a more dynamic and humble model.”

He died as he lived, openly committed to realising the dream of building a society that is modern, free, and laced with humanity through respect for journalism and democracy.

His lasting legacy will be secured with the release of his book I'm Coming to the Light. This final work recounts his experience with illness alongside reflections on the friendships and support he has enjoyed and provides further inspiration for journalists on the value and importance of the role they play in a troubled world. He writes: “I hope that after my death there will be light and calm, and that this book will give some light to whoever reads it."

We are deeply saddened by the news of Mohamed Aboelgheit’s passing. It would be difficult to measure the impact he has had on the many people's lives he touched, personally and professionally. Our heartfelt condolences go to Mohamed's family.